How much is that birth in the window?

At the end of my morning today, I met a lovely couple pregnant with their first baby. They had been trying to grow their family for quite some time and were deliciously excited to be sixteen weeks pregnant. They also happen to be American citizens living and working in Bangladesh. A few hours later, I had another nice visit with a sweet couple I know well and their beautiful two-month-old  baby girl, born at a local hospital after an attempted home birth.

The odd link between the two couples and my topic for the day is the cost of birth. 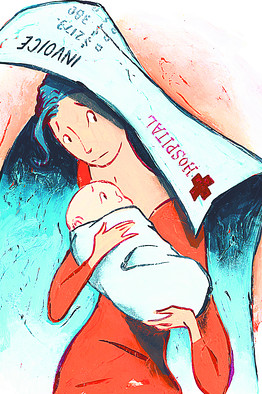 Couple #1 has a European health insurance plan (their insurer in Bangladesh is European) that puts a cap on reimbursement for the cost of birth. That cap is somewhere around $8,000 for a vaginal birth and $25,000 for a cesarean section. They are trying to decided if it's worth it (financially, emotionally, and more) to fly back to the US (or to fly instead to Bangkok) for the birth of their child.

Couple #2 planned and paid privately for a home birth, which didn't happen as they had hoped (Home birth rates in Sonoma County run about $5000 including all prenatal care, the actual birth, and home visits postnatally as well). After a long labor at home, Couple #2 ultimately transferred to the local hospital, where they had a vacuum-assisted delivery of their healthy baby girl. They do have good health insurance, which covers their birth (you might want to sit down for this one: their bill was over $40,000, despite the fact they were at the hospital less than 2 hours before their baby was born). Over the last few weeks, amidst their postpartum stupor, they have been carefully reviewing the bills from the hospital and have noted several incorrect billings, including a bill for epidural anesthesia and anesthesiologist services (The mom did not have an epidural and never met an anesthesiologist in the hospital). They won't actually be paying this crazy bill (presumably their insurance companies will negotiate some middle ground), but as responsible consumer-patients, they are at least paying attention.

As one might imagine, the charges are even higher here in California (because everything from a gallon of milk to a single-family home is)-- over $15,000 for a vaginal delivery and over $38,000 for a cesearan with complications.

But please be aware that "charge" does not equal the same as "payment" and that just because a hospital charges a certain amount to an insurance company does NOT mean the company will pay them that amount. In fact, the current Medicaid reimbursement for a vaginal delivery is $2,972.89; cesarean is $3,373.59 (data as of 2007, you can see the report here).

I did spend my lunch hour trying to find out for dear couple #1 what their true cost would be to deliver in the hospital here in Sonoma County. First, I called United Healthcare (their insurance servicer). I spent over an hour on hold and finally got a manager to give me a quote, which was clearly under what it would actually cost them: He quoted me $2500 for a vaginal delivery, $3600 for c-section, but those quotes were only what the physician costs would be (doesn't count the night in the hospital, the IV, the nursing services, the medications, etc.

I also called the hospital I work at to request a quote on their behalf. To my surprise on the billing department's phonetree, there was actually a real choice: push 1 if you are looking for the quote of a cost of an upcoming procedure. "Progress!"  I exclaimed as I pushed #1. I left my cell phone and my name (remember, I am a doctor with privileges at this hospital, meaning I actually delivery babies there. (Update, it's been 2 weeks, still waiting for a callback. Will let y'all know if it every comes. Don't hold your breath. This stuff is bizarre-o).


If this stuff gets under your skin, and you haven't been reading the NY Times series on healthcare cost craziness, you really should. Check it out here.

And, for more information on the costs of other things, you can go here, but make sure you have a big bowl of ice cream, use the restroom, and call your mother before you sit down to sort it all out-- you might be stuck awhile.

Dr. Vero
I'm a family doctor whose first dream was to be a writer. I also happen to have lots of opinions. I'm hoping that I can kill two birds with one stone: 1) By blogging I can do what I really want to do-- write 2) By sharing my opinions, I can facilitate discussion and help others feel empowered to make better healthcare decisions for themselves. (As a side note, I'm also hoping that we can all learn a little together).